What are Stepping-Stone Memories? 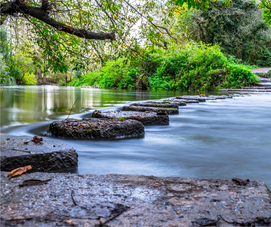 Memories are not stored as pictures or movies, and they’re not stored in one particular place in the brain. The information is stored throughout the brain and pulled together as we recall something.

"When faced with a choice, the brain retrieves specific traces of memories, rather than a generalized overview of past experiences, from its mental Rolodex, according to new brain-imaging research from The University of Texas at Austin."
—"New study decodes brain's process for decision making." ScienceDaily.

​The fact that, when faced with a choice, the brain pulls traces of different memories, rather than a full story, is the reason we use Stepping-Stone Memories.

For example:
If you were bullied in school, and when you told your parents, they didn’t support you, the final memory you need to aim for is:

Stepping-Stone Memories:
If you just created those final memories, that would be good—and better than the old ones, of course—but it would not be enough. There would still be old data to do with not being protected by adults, no one standing up for you, being powerless to stand up for yourself, not being believed, and possibly more, depending on your particular experience and the existing references from before you were bullied.

Stepping-Stone Memories address and change each of those separate pieces of data:

Stepping-Stone One:
You were still bullied, but when you told your parents, they were horrified, and immediately protective of you. They hugged you, reassured you, and then went to the school, and confronted the teacher and/or the principal and/or the bullies and/or the bullies’ parents. You could have the bullies expelled, or even arrested. Whatever that little you wished would happen.
Depending on what’s already there, this Stepping-Stone addresses feeling safe, valued, protected, heard, loved, being believed, and allowed to speak out.

Stepping-Stone Two:
You were still bullied, but a teacher saw what was happening, and stopped it. The bullies were confronted, punished, and remorseful.

This step addresses being safe: someone’s looking out for you, you’re valuable, you’re noticed, someone’s got your back, you’re not alone, and you are worth standing up for. There may be different or additional data, depending on existing references and, of course, the bullying experience itself.

Stepping-Stone Three:
The bullies start to bully, but you stand up for yourself. It could be verbally or physically defending yourself—or both. Whatever will empower that little you. You could even give that little you a magic wand to defend or protect yourself with. Remember that the unconscious part of your brain can’t tell the difference between reality and imagination, can’t use logic or reason, and can’t judge something as unrealistic—it will believe whatever you give it. This Stepping-Stone addresses feeling empowered, strong, respected, safe, and confident.

A very important piece of these memories is that the bullies are remorseful, apologetic, and respectful.

You could add other Stepping-Stones depending on what stands out from the original event.

For one of our clients, a key piece of the original experience was dreading going to school and begging her mother to allow her to not have to go back. In her case, in addition to the Stepping-Stones above, we added one where she tells her mother she doesn’t want to go back to that school, and her mother agrees, kindly, compassionately, and supportively: “Of course, sweetheart, you don’t have to go back. You can stay home, and we’ll find a nicer school for you. You never have to do anything you don’t want to do.”

Do you see how that creates a different feeling to the other Stepping-Stones? It was a very important factor in that client being able to move forward. It was also, of course, a foundation for a pattern in her life as an adult—of having to do other things she didn’t want to. Feeling she didn’t want to go to work, but had to, for example.

Practice each Stepping-Stone until it feels established, and then you can move on to the Final Memory, which would be that the negative event never happened in the first place, and instead, something wonderful happened.

How to Use Stepping-Stone Memories
Start by asking yourself what the worst things are about the original memory. What things stand out for you in terms of feelings, emotions, actions, lack of action, or other people’s reactions?

Then imagine each part of that memory as a separate piece of data and ask yourself what would have been the most empowering experience in that moment. For example, if your pet died, and one of the worst things about that situation was not being able to do anything—feeling helpless—what would it have been like if you had been empowered to do something? Give that little you a magic wand and have them “magic” the pet alive again.

Remind yourself that the unconscious part of your brain that is referring to these memories can’t judge something as unrealistic, can’t use logic or reason—doesn’t know, for example, that magic isn’t real—and won’t question it. It will believe whatever you give it. The only part of you that questions logically is your conscious mind, and you have control over that. Whatever you give that unconscious part of your brain, it will believe.

The only reason that the unconscious part of your brain will object to a new memory is if it holds other memories that contradict it, memories that it can’t change automatically. If that’s the case, you’ll find that something pops into your mind (it may appear to be completely random—remember, there’s no logic to the unconscious part of your brain and the connections it makes) and then you can change that to the opposite, positive, and empowering, as well.

As always, reach out to us for help or if you have any questions.