Feeling intense negative emotions can be overwhelming; and when it comes to stress relief - although CMT is powerful, sometimes it isn't enough to pull you out of the quagmire of stress; fear; anxiety; sadness; anger; or any of the other overpowering emotional states.
​
We've created this page to help you to take control of your emotional state in the moment, and get to the point where you're able to use CMT to make the permanent changes that will free you from the negative patterns that are causing the triggers.

* Blood is being pumped away from your organs, to your extremities (for running away or fighting)

* Healing slows down
​
* The prefrontal cortex of your brain (where you do your cognitive thinking - problem-solving; strategizing; processing of information; and so much more) shuts down (because it's not necessary for running away or fighting). This means that when you're feeling stressed, or any other negative emotion, you're literally not thinking clearly - because that part of your brain is offline!

This makes it a top priority to do whatever it takes to pull yourself out of the negative emotions, and into a state of feeling good - so that you're able to see things more clearly.

Click the buttons below to go directly to that section...

Click below to download a pdf document with the Stress Relief Reading material - so you can access it from your device, on-demand. (Thank-you for that idea, Ben Orr :) ) 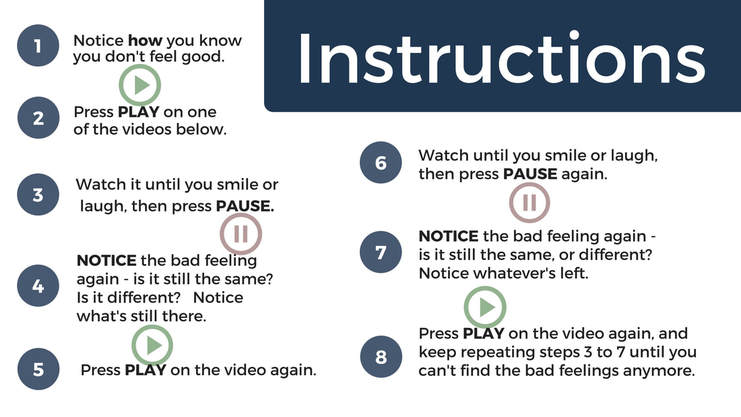 Step 9:
​Now, use ESC to change the original subconscious references (memories) that caused this emotional state, so that you don't have to experience it like this again. :)
We will add to these videos regularly, so come back for more whenever you need to! :) 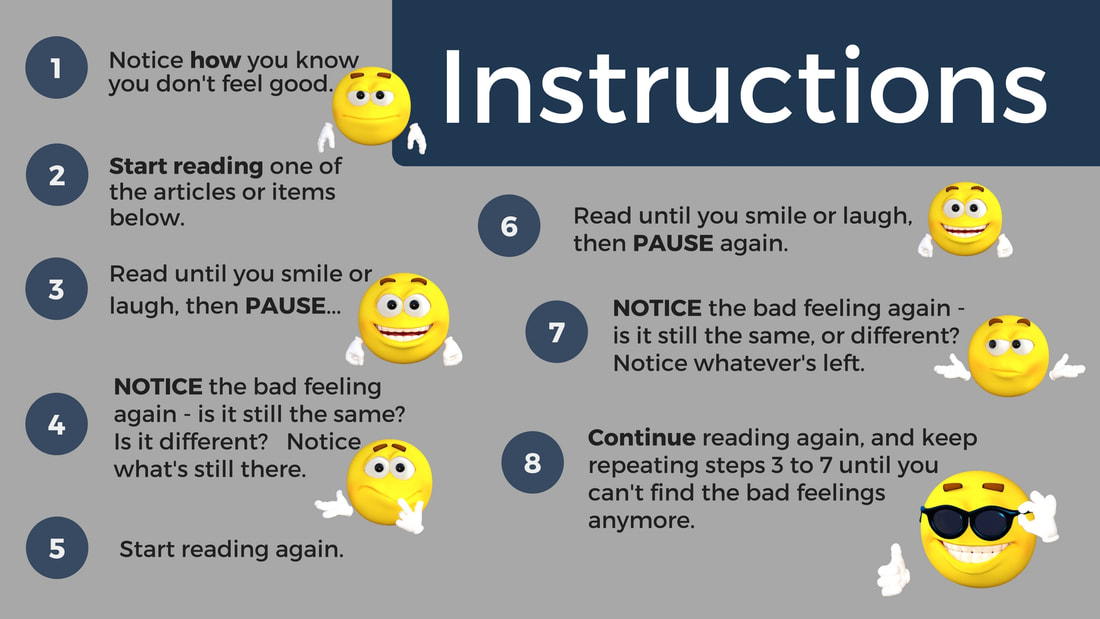 Step 9:
​Now, use ESC to change the original subconscious references (memories) that caused this emotional state, so that you don't have to experience it like this again. :) ​

As we pulled into the parking lot, we saw a couple of people looking under the hood of their car. Concerned, Mom wondered aloud, "Do you think they have a flat tire?"

While taking stock of our products, I read aloud the final numbers to my boss. As he entered each one into a calculator, I deleted it off my mobile device. Only after I’d finished did we realize that he had entered the numbers on his desk phone’s keypad.

My sister didn’t do as well on her driver’s-ed test as she’d hoped. It might have had something to do with how she completed this sentence: “When the ______ is dead, the car won’t start.”

I stayed in a hotel where the towels were so thick, I could hardly close my suitcase.

Penn Jillette, the chatty half of the magic duo Penn & Teller, shared with us his favorite clean joke:

Two racehorses are in a stable. One says to the other, “You know, before that last race …”

“The one that you won?” asks the other horse.

“Yeah, before that race, I felt a pinch in my hindquarters.”

The other horse says, “Funny, I felt a pinch in my hindquarters before the race that I won.”

A dog walking by says, “You idiots, you’re being doped. They’re injecting you with a drug to make you faster!”

The first horse turns to the other and says, “Hey, a talking dog!”

A customer walked into our insurance office looking for a quote. But first I had to lead her through a litany of questions, including: "Marital status?"

"Well," she began, "I guess you could say we're happy-as happy as most other couples nowadays."

An aching back sent me stumbling to the drugstore for relief. After a search I found what I was looking for: a selection of heating pads specifically for people with back pain—all on the bottom shelf.

One of our visiting Italian students at Sheppard Air Force Base said he wouldn't be able to fly that day.

"Why?" his teacher asked.

Marshaling all the English he knew, the student pointed to his ears and explained, "It's my fallopian tubes."

Client to designer: “It doesn’t really look purple. It looks more like a mixture of red and blue.”

A doctor sent this note to our medical clinic: “Patient needs a referral for your office from me. I saw her for her ankle and would like you to run over it.”

I phoned a local restaurant to ask if it was on the north or south side of Main Street. The person on the other end answered, “That depends on which direction you’re coming from.”

While we were working at a men's clothing store, a customer asked my coworker to help her pick out a tie that would make her husband's blue eyes stand out.

"Ma'am," he explained, "any tie will make blue eyes stand out if you tie it tight enough.

While I was out to lunch, my coworker answered my phone and told the caller that I would be back in 20 minutes. The woman asked, “Is that 20 minutes Central Standard Time?”

Stuck in rush-hour traffic, I couldn't help but stare when a burly biker wearing black leather jacket and chaps pulled up next to me on a shocking pink Harley Davidson. My first thoughts were, "Is that really a pink Harley? I wonder if he's…"

Just then the traffic cleared and he pulled in front of me. On the back of his helmet were stenciled the words "Yes it is. No I'm not."

I asked my brother-in-law, the father of four boys, “If you had to do it all over again, would you still have kids?”

Source for the above jokes: https://www.rd.com/joke